We started from home around eight in the morning, and stopped at Kaladi, to visit the Sri Sankara Keerthi Sthambha, and the temple built on the birthplace of Sankaracharya. From Kaladi, I drove the car upto Munnar. We stopped on the way to see Cheeyappara waterfall. 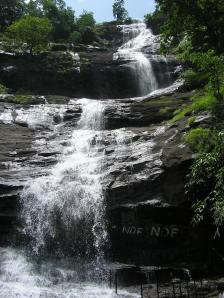 We reached Munnar around two in the afternoon, and rested for a while. In the evening, we went to see the hydel park. I had gone there during the excursion from school three years ago, and it was a place worth seeing back then, but now some renovation work was going on, so most of the park was nothing but mud and sand. 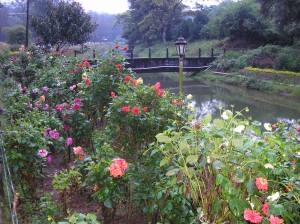 After that we went to see the vegetable market, only to find that most of the shops were closed. On asking a native, we learnt that in Munnar, Wednesday is a holiday for most enterprises, while Sunday is a working day!

We set off in the morning to see the “Tea Museum” at Nallathunni, which is nothing but a mini tea factory of the Kannan Devan Hills Plantations Company Ltd. (erstwhile Tata Tea Ltd.). An interesting feature of the company is that 69% of its shares are owned by its 12,500 employees! When we reached there, we were told that the museum would open only at 10 am, so we had to wait for a while. That gave me ample time to walk around and take some photographs.

It was a great experience to see how tea is being manufactured. Actually, on my last visit, I had the fortune to see a real tea factory, as one of Achan’s friends was a supervisor in one of the tea factories. But now they don’t allow visitors any more, and have set up this museum- which is a very good move- because all tourists can learn how tea is made. Besides the tea manufacture, we were also shown a 30 minute documentary on Munnar’s history, which is closely associated with the history of tea plantations.

After that we went to the Eravikulam National Park, home of the endangered Nilgiri Tahr. Last time I went there, unfortunately we didn’t see a single Tahr, but this time we were luckier. A forest department bus takes you from a check point to the entrance of the National Park. From there, you have to walk around one and a half kilometres to the top.

The Nilgiri Tahr is not at all afraid of human beings, and come very close. This is one of the reasons it is endangered. I was enraged to see people prodding and poking the gentle beasts. Instructions are written all over the park forbidding people from touching the tahr, but I wonder how many pay attention to that. The forest officials are doing a good job, but they can’t walk around and tell each and every person, can they? Tourists ought to have common sense and responsibility.

In the afternoon, we visited the Madupetty dam, and went on for a few more kilometres to the Echo Point, which is a spot in the catchment area of the dam. From there you have a picturesque view of the river meandering down the hills.

In the evening, we visited the Munnar market. It is a place bustling with activity. Most of the shops sell vegetables, fresh from the garden. You’ll never see such vegetables in Thrissur, or any of the towns. One thing I noticed, while roaming around Munnar, is the absence of beggars. Everyone seems to be involved in some work. It is a busy community.

We set off for Kodaikkanal after breakfast. Our route was through the Marayoor forest, famous for sandalwood, and the Chinnar Wildlife Sanctuary. We were told that we could see bisons if we left early in the morning, but it was broad daylight by the time we reached there, and didn’t see any. But we were fortunate to see spotted deer.

It was four in the afternoon, by the time we reached Kodaikkanal. We went for a walk around the lake, which comes to around five kilometres. We rested at the Bryant Park, and returned to the hotel.

We went boating in the lake, in the morning.

Afterwards, we walked along the Coaker’s Walk, which is a path on the side of the mountain, from where you have a great view of the hillside. Next up we decided to go to the Guna Caves, but it was not to be. On the way, there was a huge traffic block, like the ones you see in Bangalore! The whole world seemed to be headed for the caves! We stopped by a pine forest on the way. The fuel in our car was running out, and we decided to head back without stopping anymore.

Homeward bound! It was a long drive home- 240 kms. Achan and I shared the distance between us. Since Amma and Ashwini were affected by food poisoning (I was affected too, but only mildly), we started only by noon. The route was Kodaikkanal – Pazhani – Udumalpet – Pollachi – Kozhinjampara – Chittur – Alathur – Pazhayannur – Thrissur. An interesting sight on the way back, was the vast wind energy farm between Pazhani and Udumalpet. Reached home around seven in the evening, and was thoroughly exhausted by the long car ride.

View all posts by Kishore Athrasseri

This work is licensed under a Creative Commons Attribution 4.0 International License.